How it all began: It all began by making RSW systems and heat pumps in a shed at Bolsønes Verft

The arm of PTG currently based in Malme­fjorden north of Molde has been refining its technology since the late 1970s for appli­cation to fish. Per Johansen, currently vice president sales at PTG Frionordica, was one of the three colle­agues responsible.

Origi­nally called Aquaterm and later FrioNordica, the company has built up compre­hensive expertise with and experience of cooling and heating seawater over four decades. 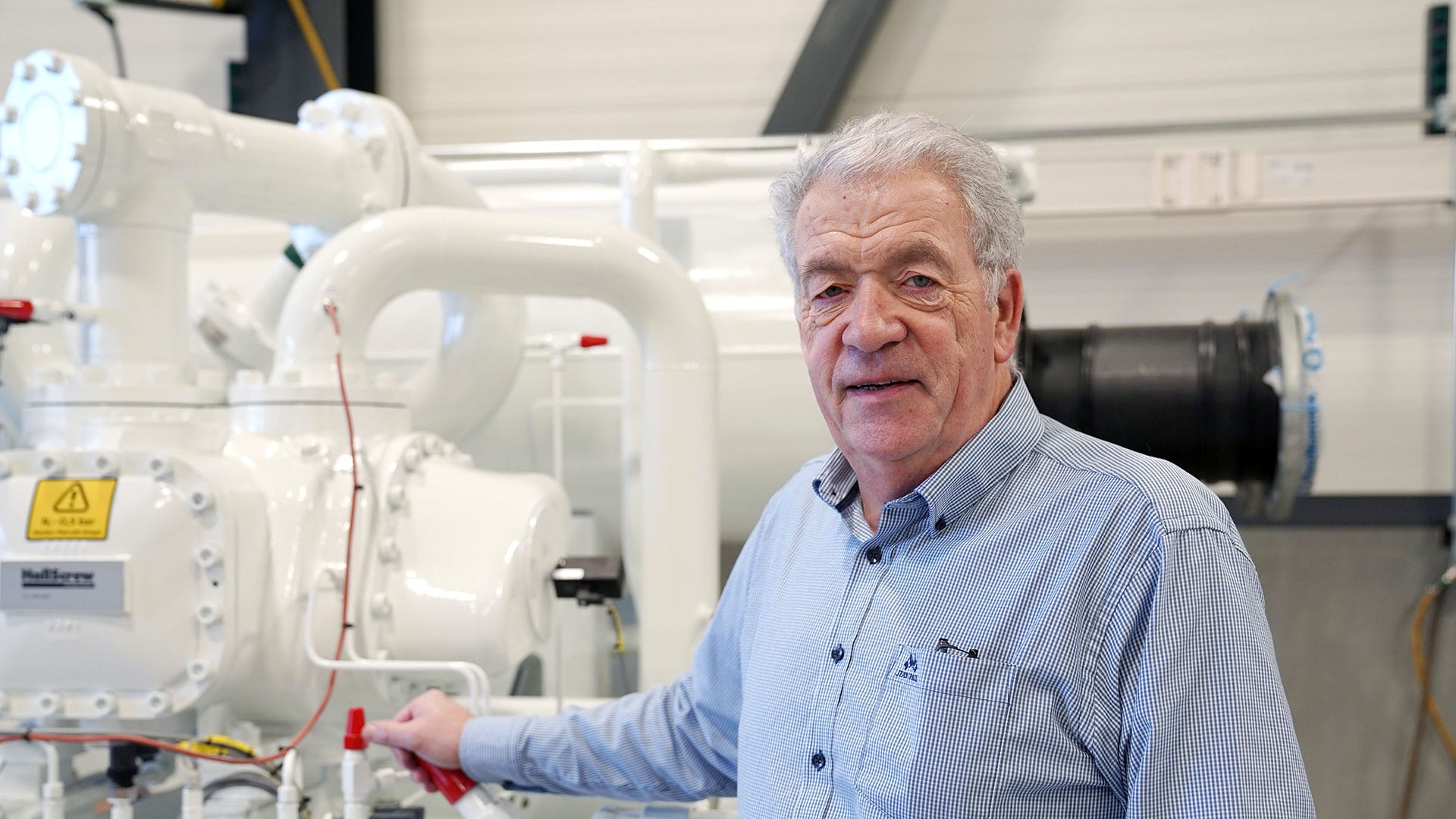 The arm of PTG currently based in Malme­fjorden has been refining its technology since the late 1970s for appli­cation to fish. Per Johansen, currently vice president sales at PTG Frionordica, was one of the three colle­agues responsible.

Smolt
It all began when Johansen worked with Stein Magne Årseth and Erik Holm at Bolsønes Verft in Molde, which had been making refri­ge­rated seawater (RSW) system for fishing boats since 1965. The yard was a pioneer in applying new refri­ge­ration technology to preserve the quality of herring and mackerel.

A new period began for the yard in 1979 when it won the job of manufacturing a heat pump for a smolt plant run by Sæter Fiske­opp­drett in Sunndalen. This was the first unit of its kind for smolt production.

Bolsønes Verft went into liquidation in 1983, and Johansen, Årseth and Holm estab­lished Aquaterm on the basis of the yard’s heat-pump activity. They built a new factory and office building on the site, and had up to 30 employees at peak.

A number of heat pumps and exchangers were built over time for smolt plants, and these became important products for Aquaterm. About 400 plants have been delivered so far, including a first delivery to Artec Aqua in 2003-04. This was installed at Bindals­smolt, part of the Sinkaberg-Hansen seafood company. 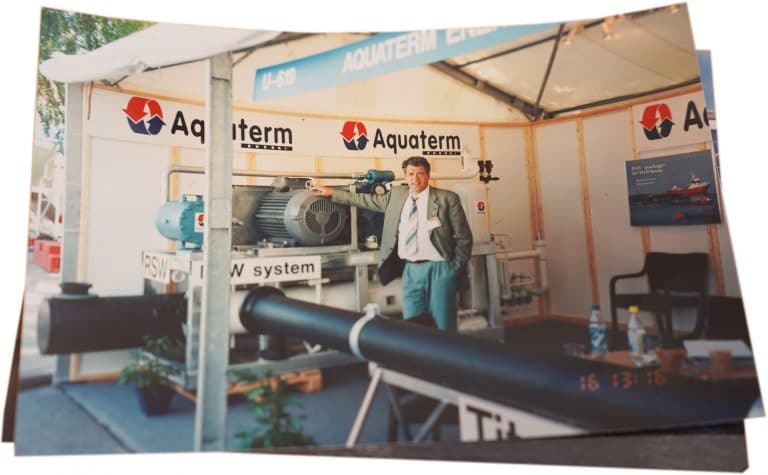 Bolsønes Verft went into liquidation in 1983, and Per Johansen, Stein Magne Årseth and Erik Holm estab­lished Aquaterm on the basis of the yard’s heat-pump activity. Here is a younger version of Per at an exhibition for Aquaterm.

Up and down
Although the aquaculture industry has been very important for companies along the Norwegian coast, it has had many upturns and downturns. These also affected Aquaterm.

The bankruptcy of the industry’s FOS sales organi­sation in 1991, combined with Norway’s bank crisis, many life difficult for the company. The dawning bank crisis had also contri­buted to the failure of Bolsønes Verft in the early 1980s.

Nevert­heless, Aquaterm survived and eventually estab­lished a colla­bo­ration with Finsam in Grimstad. Per R Samuelsen at the latter had met Johansen when the pair were studying refri­ge­ration technology at the Norwegian Institute of Technology (NTH) in Trondheim.

Finsam had been estab­lished as early as 1965, and was renowned in the fishing industry worldwide for its leadership with a number of ice machine types and ice storage systems. Its inter­na­tional business allowed Aquaterm to become involved in purposeful exports. PTG Frionordica still has a department in Grimstad and a subsi­diary in Chile.

FrioNordica emerges
The first FrioNordica company was a joint venture between Aquaterm and Finsam Refri­ge­ration, estab­lished as early as 2001 in Chile under the name Frionordica Refri­ge­ración Limitada. It had offices in Puerto Montt and Conce­pcion to provide local service for products from the two companies.

Aquaterm and Finsam then estab­lished a joint sales company called FrioNordica in 2006, and merged two years later under this name.

FrioNordica has worked steadily to simplify, speed up and ratio­nalise, giving priority always to devel­oping its own products for salmon and fishing and for production in Norway. Key reasons for this have been short delivery times and control of quality.

All production was therefore concen­trated in Molde during 2010, with manufacturing and the head office moving to new and modern premises in Malme­fjorden the following year.

Manufacturing and the head office for PTG Frionordica moved from Molde to new and modern premises in Malme­fjorden in 2011.

Qualified personnel
Molde has been known over more than 70 years for its large and highly qualified involvement in devel­oping and building cranes. The offshore industry flourished from the late 1990s to 2014, making it difficult for FrioNordica to compete over qualified personnel in Molde. The supply of industrial sites was also limited there.

So Johansen turned his attention to the neigh­bouring local authority of Fræna (now Hustadvika) and Malme­fjorden. This is one of the biggest farming commu­nities between Stavanger and Trondheim, and also hosts a number of industry and export companies such as Tine, Moxy Trucks and Hustadmarmor.

Given this work culture and industrial background, it was easier to recruit able workers who suited FrioNordica there. More people, including residents of Molde, have now grasped the devel­opment opport­u­nities offered by the seafood sector and PTG in Malmefjorden. 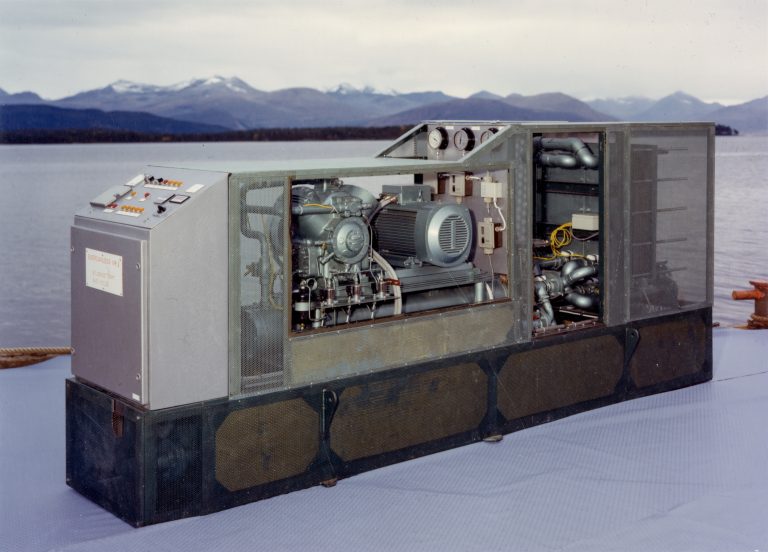 Heat pump system made at Bolsønes Verft in the period between 1980–84.

Big leap
“Progress has been huge,” reflects Johansen. “Before I retire, we’ll have delivered heat pumps to our first fish farm. That’s a big milestone for me, while this project gives PTG a unique opport­unity to test its products in full scale.

“We’re now building the energy system of tomorrow for land-based aquaculture here in Malme­fjorden. These are large heat pumps by Norwegian standards. We’ve made a big leap from the first heat pumps with an output of 60–70 kW which I helped to build more than 40 years ago to the Salmon Evolution units of 5 000–6 000 kW.” 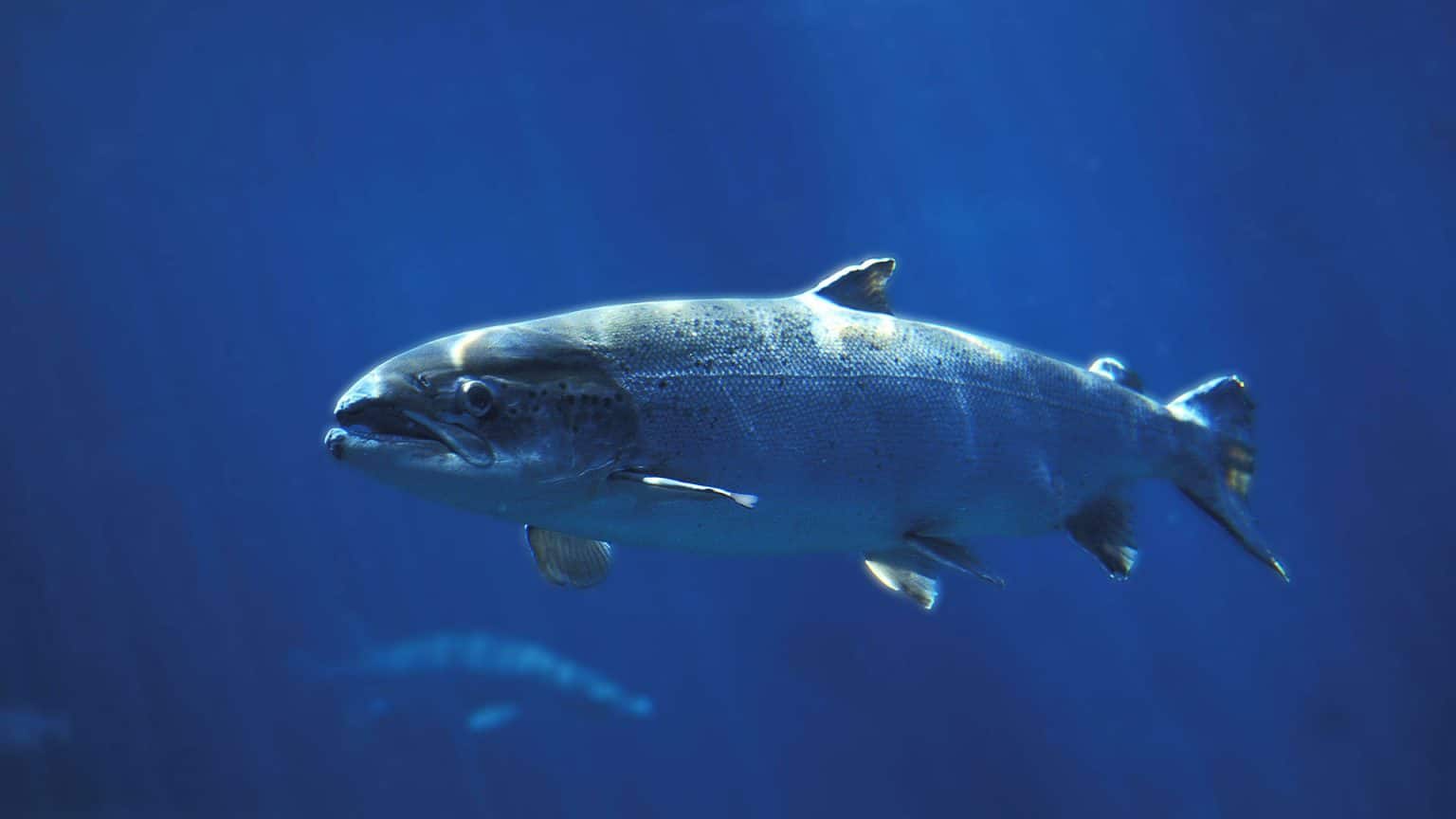 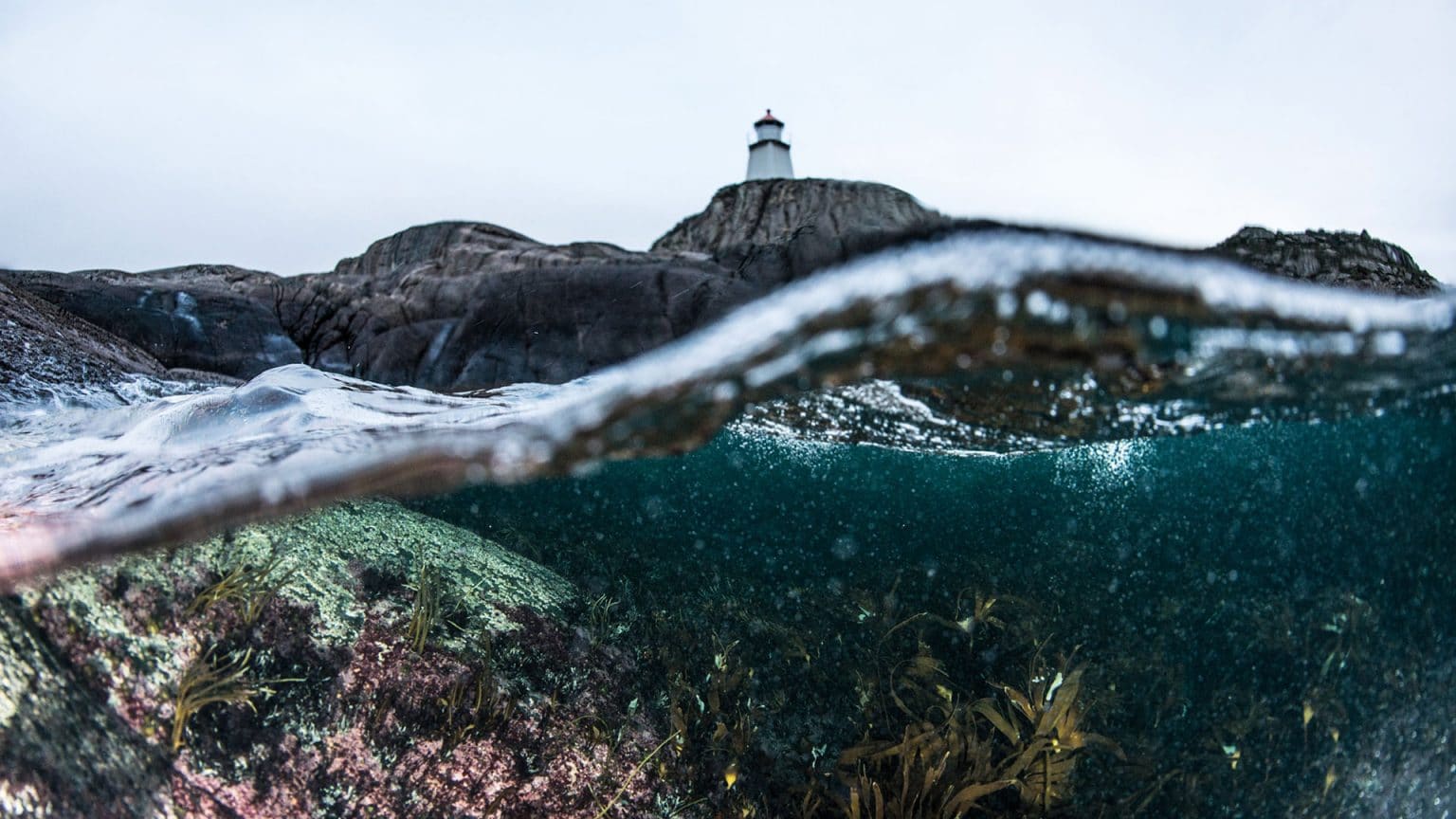