PTG expands to the UK

Julian Ramsey in Fraser­burgh harbour, home of the Scottish pelagic fleet in mainland UK. He will be taking up the new post of general manager in the newly estab­lished PTG UK Ltd company on 1 August this year.
Norway’s PTG is inten­si­fying its focus on the industrial and marine markets in the UK and has estab­lished a new company in Scotland which will provide sales and service to the British seafood industry. Management is already in place for the new company.

“We’re estab­lishing ourselves in Scotland to provide service locally for our existing customers in the fishing fleet and land-based fish farming,” says Terje Arnesen, CEO of PTG. “In addition, we want to strengthen our local sales and marketing of our products and solutions for the Scottish seafood market.”

Julian Ramsey has been employed as general manager for the newly estab­lished PTG UK Ltd company. He has more than 30 years of technical and management experience from the maritime industry, including head of MacGre­gor’s fishery division in Peterhead, Scotland, since 2007. Ramsey will take up his new post on 1 August this year.

He says that no decision has yet been taken on where the PTG office will be located, but that this will be done during the summer. In addition to choosing a location, one of Ramsey’s first tasks will be to recruit more local service personnel for PTG UK.

PTG’s main markets in Scotland will be in the marine and industrial sectors, with such solutions as RSW systems for cooling seawater on ships, heat pumps, and freezing and ice production systems.

The company is parti­cu­larly interested in being able to service the pelagic and whitefish fleets, land-based fish farming, fish slaugh­terers, process industry on land and, to some extent, well boats and the rest of the aquaculture industry.

“We’re consi­dering several alter­native locations, with Peterhead or Fraser­burgh among the most relevant,” says Ramsey. “Peterhead is the largest whitefish port in Europe in terms of landing value, and includes a pelagic fleet and some large processing plants.

He adds that no single best-possible location really exists where service and sales to the aquaculture industry are concerned, since the facilities are spread around the entire Scottish coast.

“But no matter where we choose to be in Scotland, we will certainly be able to offer a prompt and efficient service to any and all of PTG’s customers in the aquaculture industry on the Scottish mainland,” he concludes. 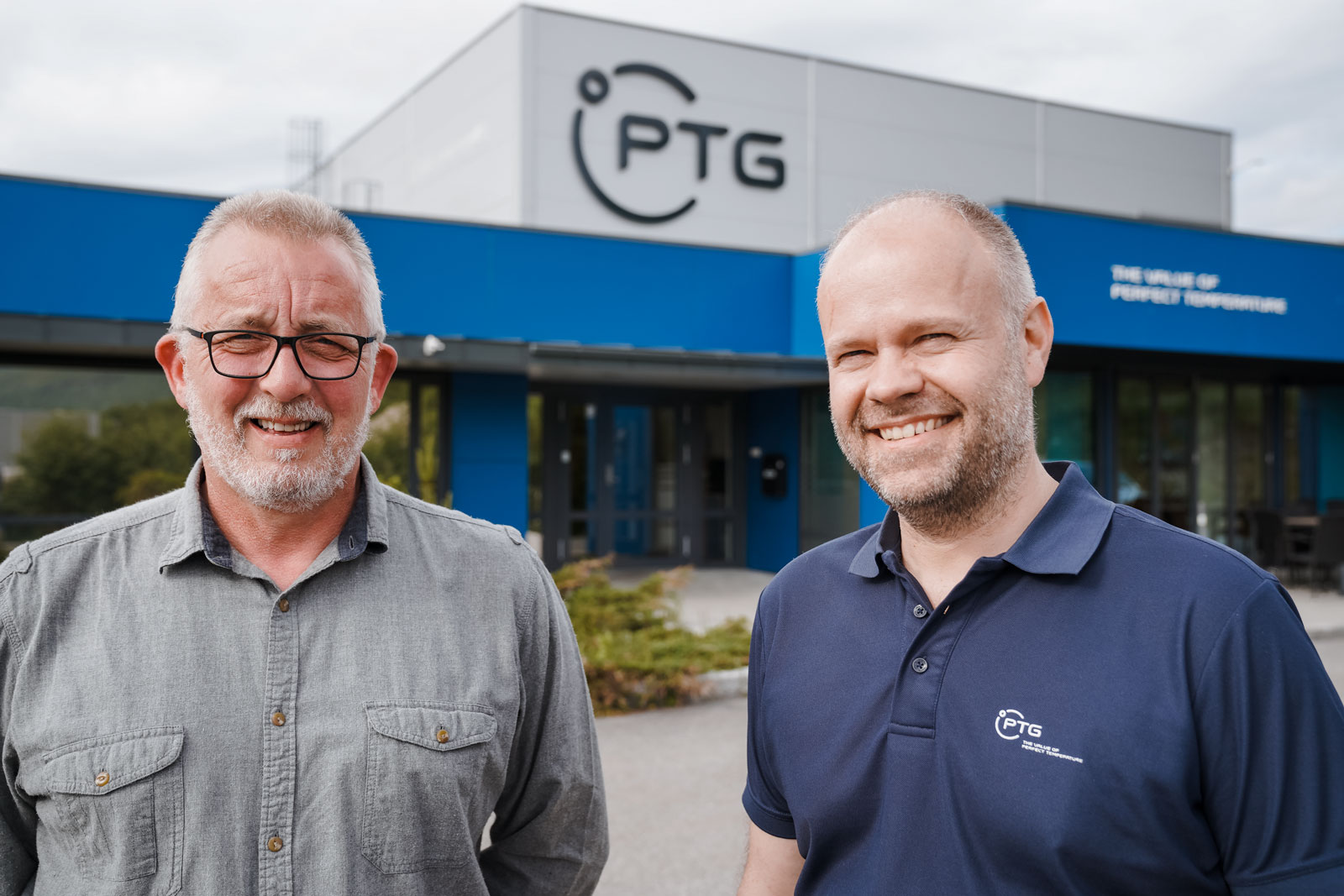 Outside the factory in Malme­fjorden on the west coast of Norway; To the left Julian Ramsey, general manager for the newly estab­lished PTG UK Ltd company, and to the right and to the right Johnny Valle, sales and market director for marine and industry in PTG.
PrevArctic Kulde becomes part of Norway’s largest centre of expertise on tempe­rature management
Showing the way forward for refrigerationNext
The value of
perfect temperature
Reduced energy consumption and better climate, better food quality and reduced waste — locally and globally.
CONTACT
FACEBOOK
DATA PROTECTION DECLARATION
MANGFOLDSARBEIDET I PTG
PTG (C) 2020