From left: Kristina N Widell at Sintef Ocean, Frode Berg, technical manager, PTG, and Yves Ladam, devel­opment manager, PTG, at the CoolFish meeting in Ålesund during September 2022. CoolFish is a research project with funding from the Research Council of Norway.

A project aimed at finding refri­gerant alter­na­tives to R22, ammonia and hydro­fluo­ro­carbons was the starting point for extending CO2 to the maritime sector. Pursued with the Norwegian University of Science and Technology (NTNU) and its Sintef research arm, this work targeted coasters/fishing vessels with capacities up to 500 cubic metres. “Customers have many different motives for seeking such options, and we’ve tried to respond to them all,” says Yves Ladam, devel­opment manager at PTG.

He was clear enough about the group’s motiva­tions when presenting these solutions to an attentive audience at the recent CoolFish meeting in Ålesund. 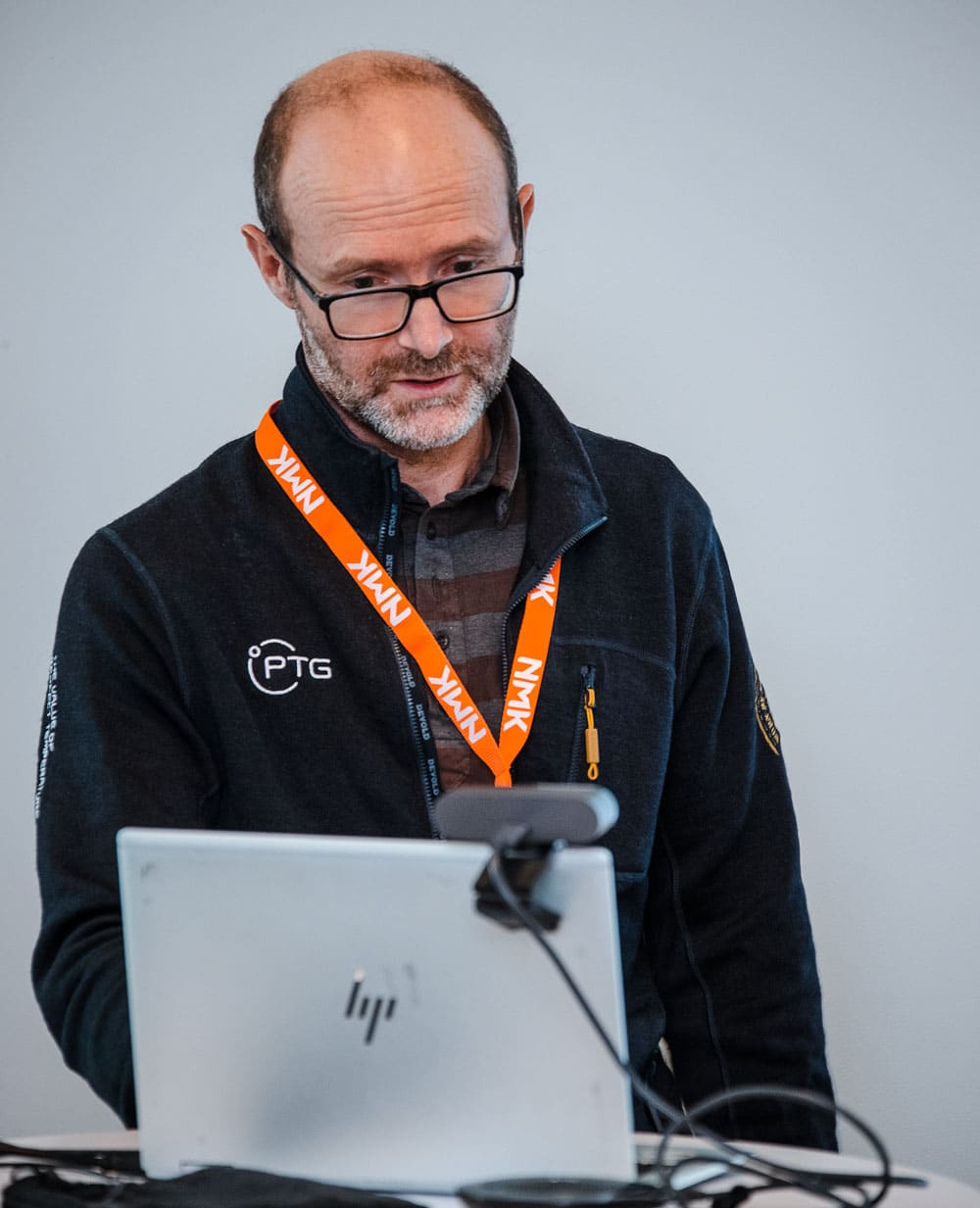 Devel­opment manager Yves Ladam at PTG presented the group’s CO2 solutions to an attentive audience at the CoolFish meeting.

Ladam noted that a number of customers were reluctant to use ammonia because it is toxic, and many also lacked the space for a separate engine room. Another motivating factor for those involved with HFC-R22 systems was problems posed by expensive leaks.

SeaCo2ol RSW
These consi­de­ra­tions prompted PTG to begin devel­oping an alter­native approach, which reached the prototype stage in 2010. It was initially intended to replace R22 instal­la­tions, but a full product range called for further research and devel­opment work lasting until 2016.

In his presen­tation, Ladam reviewed the group’s journey since launching the project and referred to its 240 megawatt facility on Båragutt. This included a flooded evapo­rator, a specially constructed oil separator and four Dorin compressors.

However, it turned out to be heavy and relatively expensive – as well as complex compared with ammonia (NH3) and HCF options. Work was therefore initiated to cut costs.

The result was what Ladam called the “modern SeaCo2ol” solution for CO2, comprising a low-pressure receiver (LPR) with around 15 per cent liquid out to the evapo­rator, a liquid ejector and the TEX evapo­rator from PTG Frionordica. It has a 150 kilowatt compressor but no oil separator, helping to cut generator weight, enhance cost efficiency and reduce complexity. About 40 of these units have been delivered, and more are on order.

Super­Freeze
CO2 can also be used in Super­Freeze plants for fish, and Ladam took the opport­unity to talk a little about PTG’s solutions here as well. The group delivers what he calls transcri­tical CO2 plants to an industrial standard.

These facilities have a freezing capacity of up to 60 tonnes per day, and utilise pump-circu­lated refri­gerant for reducing product tempe­rature on board to ‑50°C.

Asked why PTG believes that customers want such plants, Ladam refers back to his expla­nation that they want to avoid expensive leaks with other refri­gerants and that ammonia is toxic.

“It’s also the case that a lot of them lack the physical space for a separate engine room. A CO2 instal­lation will moreover provide faster freezing and is compact – a feature many want. The prototype for this solution was first delivered in 2014, and can also be supplied in a variant with combined refri­ge­rated seawater (RSW) and freezing.”

He confirms that PTG has also used a classic booster layout in a two-stage plant, with oil return from the ‑50°C tank. “We thereby achieve efficient freezing and defrosting, along with the compact solution offering low mainte­nance costs. And a natural refri­gerant is used.”

Ladam says experience with CO2 plants on vessels has so far been fairly varied. “The demand is for large and stable levels of fish processing. Minor and what we might call trivial problems can create a lot of bother – the threat of leaks means that strict require­ments are set for finding the right seals.

“Sourcing compo­nents can also be a problem. We use large transcri­tical compressors, big titanium heat exchangers and so forth. New compo­nents may have teething problems, and oil recir­cu­lation presents conta­mi­nation problems. And this is a relatively complex solution, which can be a challenge in itself.”

He also notes that CO2 may be non-toxic but does present a risk of suffo­cation in certain circums­tances, and that PTG takes this very seriously.

Backstory
PTG Kulde­teknisk was founded in 2003 by Tor Vangberg and Frode Berge with four other former colle­agues. It has subse­quently been a pioneer in devel­oping environment-friendly refri­ge­ration technology, parti­cu­larly based on CO2.

Since starting up, the company has supplied its innovative CO2 refri­ge­ration plants with energy recovery to all the large Norwegian grocery chains – including Coop, Rema, Norges­gruppen and Ica.

It went on in 2011 to deliver the world’s first RSW plant with CO2 as the refri­gerant for cooling seawater on a purse seiner.

The company won an initial contract covering a transcri­tical freezing plant for the maritime segment in 2014. That year and next, it built and tested a full-scale pilot facility with CO2 as the refri­gerant on freezer trawler Roaldnes for Nordic Wildfish.

CoolFish
Funded by the Research Council of Norway’s large-scale programme for energy research (EnergiX) and industrial partners, the CoolFish project aims to help develop energy-efficient and climate-friendly systems for refri­ge­ration and heat production on fishing vessels.