- A cooling purpose out of the ordinary

PTG Kulde­teknisk has been awarded a contract for the devel­opment and delivery of cooling systems for particle detectors at CERN in Switzerland.

“This is one of the most special cooling purposes we have ever had,” says technical manager Frode Berg.

PTG Kulde­teknisk long experience with CO2 as a refri­gerant was empha­sized when CERN chose a supplier.

Large Hadron Collider (LHC) at CERN is the world’s largest and most powerful particle accele­rator. It runs in a 27-kilometer circular tunnel on the border between France and Switzerland, and is equipped with four large particle detectors situated around the ring. These are very sophi­s­ti­cated devices that measure the properties of particles emerging from the collisions.

Large energy require­ments require cooling
Thousands of silicon sensors are at the core of the two largest LHC detectors – ATLAS and CMS. They dissipate up to a few-hundred kW during operation, but in order to minimize damage induced by the high-energy particles from the colli­sions, they must also be kept at tempe­ra­tures well below 0 °C.

Two-phase pumped loops of CO2 are used in the core of the detectors to remove the dissi­pated heat and keep the sensors cold. Until now traditional chillers operating synthetic refri­gerants have been used to cool down the CO2 pumped to the detector. For the next generation of detectors, it has been decided to migrate towards natural refri­gerants for these “upstream” chillers.

CO2 comes into its own
There are many special challenges with this plant that require special solutions. CERN already uses CO2 as a refri­gerant and was deter­mined to focus on a solution with this refri­gerant. Require­ments for tempe­ra­tures below ‑50ºC and pipe systems going 100m into the ground are some of the technical reasons for choosing the refri­gerant. These are coupled to CERN’s global strategy of reducing the organization’s environ­mental footprint.

Designed and manufactured in Tromsø
PTG has production of tempe­rature and energy solutions both in Tromsø and in Malme­fjorden (Molde). It is with PTG Kulde­teknisk in Tromsø that these special plants are designed and manufactured. According to project manager Martin Corne­li­ussen, work is now underway on designing the system, and delivering the first rigs are to be completed in the beginning of 2020.

CERN
The European Organization for Nuclear Research is an inter­na­tional organi­sation for particle physics research. CERN’s opera­tions are concen­trated on particle physics and comprise the world’s largest research centre in these disciplines.

The centre is located on Swiss-French border near Geneva airport. At the research centre is the Large Hadron Collider, a huge particle accele­rator that has been the Laboratory’s flagship facility since research began there in 2010.

CERN was estab­lished in 1954 by 12 countries in Europe. Today, the organization has over 20 member countries, around 2,600 full-time employees plus nearly 14,000 scien­tists and engineers from over 500 univer­sities and 80 nations. 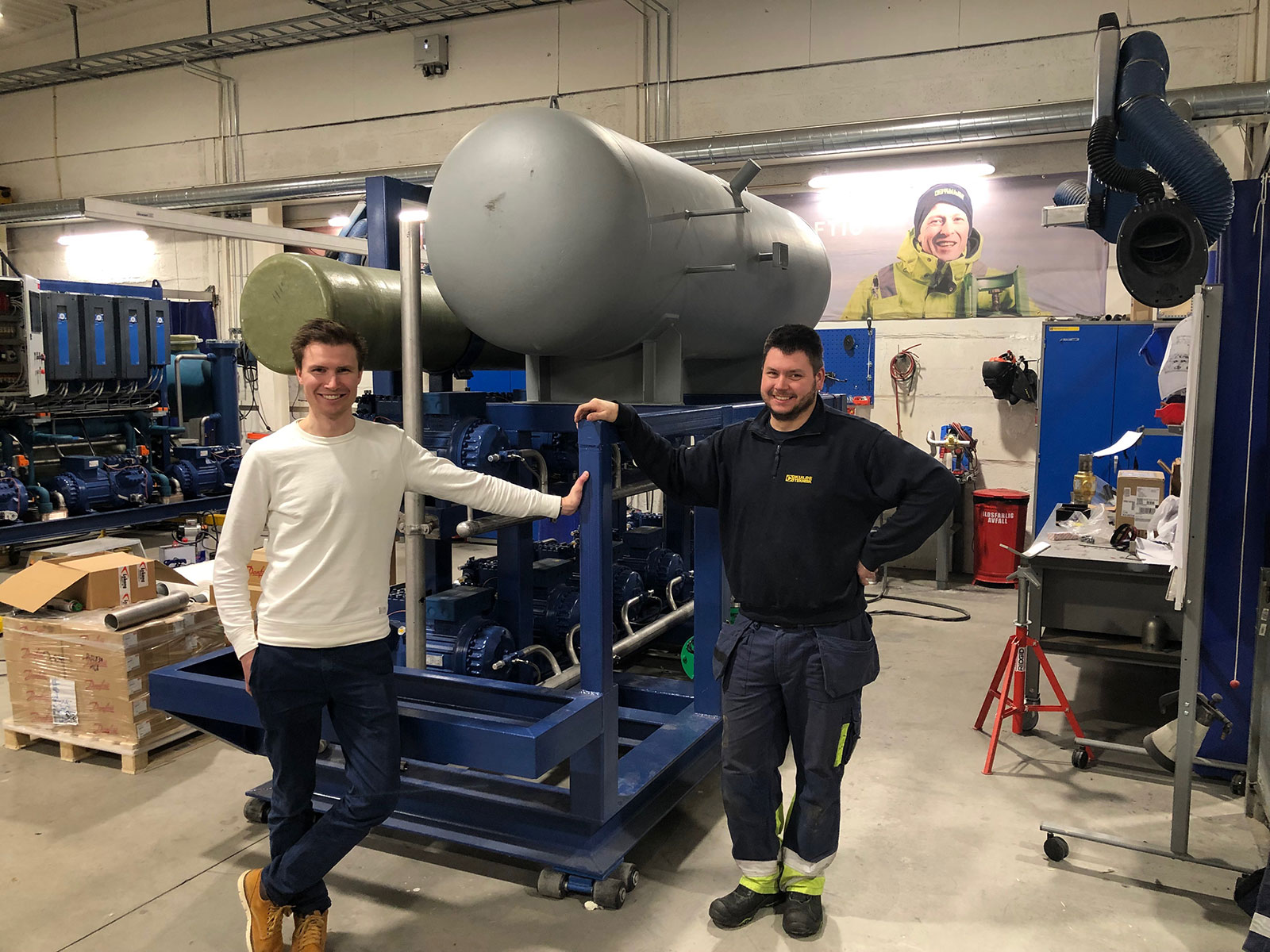 The contract for the devel­opment and delivery of cooling systems for particle detectors at CERN in Switzerland is a very exciting project for PTG. Project manager Martin Corne­li­ussen (left) and project engineer Cato Kristi­ansen are respon­sible for the project. Technical manager Frode Berg and devel­opment manager Yves Ladam have been important contri­butors in the devel­opment of the project.